Members of the Grippo Lab

My name is Angela Grippo.  I am an Associate Professor in the Psychology Department at Northern Illinois University.  I received a BS from Drake University (1998), and a MA (2000) and PhD (2003) from the University of Iowa.  I completed two postdoctoral fellowships, at Loyola University Medical Center (2003-04) and the University of Illinois at Chicago (2004-08).  In 2008, I joined the Department of Psychology at Northern Illinois University. The research program in the Grippo Lab is focused on the association between mood disorders and heart disease, and also mechanisms involved in social stress, emotion, and cardiovascular function.  In my free time, I spend time with my husband and son, and I enjoy traveling and outdoor activities. 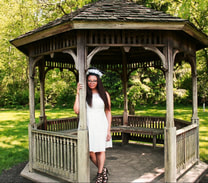 Bawo ni! My name is Oreoluwa Akinbo, Ore (oh-ray) for short. I received my BA in Psychology and minors in Chemistry and Neuroscience from Butler University. I fell in love with the brain watching brain surgeries and documentaries on Discovery Health. I am particularly interested in schizophrenia and other anxiety and depression related disorders. I am currently pursuing a PhD in Neuroscience and Behavior at NIU in both the Grippo and Matuszewich Lab. When I’m not in lab or studying, I love capturing life on my dslr, cooking and crafting projects I’ve found on Pinterest.  *Ore joined the lab in the fall of 2017.  She has been assisting with our ongoing studies focused on stress, behavior, and the brain. Her master's project will use the prairie vole model to investigate how mild stress during early life may protect against behavioral and endocrine consequences of social stress later in life.

My name is Ryan Groch. I am a third-year psychology major with a minor in philosophy. I’ve developed a fascination for the brain and its relation to behavior throughout my coursework. From a research standpoint, I am highly interested in methods of counteracting stress and depression, and I think that the Grippo lab has an effective and intriguing way of exploring these topics. In my free time, I enjoy reading on whatever topic happens to have captured my momentary interest and playing a variety of musical instruments such as saxophone, piano, and flute.  *Ryan joined the lab in the fall of 2019.  He has been assisting with our studies of stress, behavior, and the brain.

My ​name is Tommy Miller. I grew up in DeKalb and NIU has always been a part of my life in some way. I am an undergraduate Junior pursuing a BS in Psychology and a minor in Cognitive Studies. I have always been interested in this area of science and being in the research lab has definitely helped to reinforce what I have learned in class. My goal after graduation is to work in more research laboratories and to perhaps publish my own research someday. While not in class I enjoy cooking, playing video games, and helping out in the garden.  *Tommy joined the lab in May of 2019.  He has been assisting with several studies of stress, emotion, and behavior.

My name is Marigny Normann (pronounced mare-in-ee, the 'g' is silent) and I'm from Pittsburgh, PA. I received my BS in Psychology from Edinboro University of Pennsylvania. I have always been interested in the brain and behavior, which led me to study animal models of depression and ADHD at Edinboro. I'm excited to continue researching the physiological impacts of mood disorders at NIU! I am currently working towards my PhD in Neuroscience and Behavior. When I am not doing school work or lab work, I can usually be found in my kitchen trying to make elaborate meals or watching a Disney movie on VHS with my Guinea pig.  ​​​​*Marigny joined the lab in the summer of 2016.  She has been assisting with our environmental enrichment and exercise experiments, and our new studies on cognition. Her master's project will use the prairie vole model to investigate the effects of juvenile stress on adulthood social behaviors, emotion-related behaviors, and stress reactivity.

My name is Tang Watanasriyakul. I received a BS in Psychology (2013) and an MS in Physiology & Neuroscience (2016) from Wright State University. I am currently a PhD student at NIU in the Neuroscience & Behavior program, working jointly in the Grippo Lab as well as the Matuszewich Lab. My research interests include stress-related HPA dysfunctions, social buffering, and related neural mechanisms. In my spare time, I enjoy spending time with my 2 feline babies, cooking, and Pokémon hunting around campus.  *Tang joined the lab in August, 2016.  He has been contributing to our studies of oxytocin, stress, exercise, and social stress. His dissertation project will use the prairie vole model to investigate the influence of stress and depression on social behaviors, parenting behaviors, family group interactions, and prairie vole offspring development.

Dr. McNeal joined the Grippo Lab in 2008 as a graduate student.  He completed his PhD in 2015, and remained on the team as a postdoctoral fellow.  His research focused on the behavioral, neuroendocrine, and cardiovascular consequences of disrupting social bonds using the prairie vole model, as well as the potential protective effects of antidepressant treatment.  He is an author on multiple publications, and is the first author on a publication in Psychosomatic Medicine.  He has contributed to several presentations, and is the first author on conference presentations such as for the Society for Neuroscience and Experimental Biology.  He has won several awards as a student, including a Dissertation Completion Fellowship and an Outstanding Graduate Student Award from NIU.  He now works as a Research Psychologist for the United States Navy (currently stationed in San Antonio, TX).

Dr. Scotti was a postdoctoral fellow in the Grippo Lab from 2010-2014.  Her research explored the role of oxytocin and other hormones in the link between depression and heart disease.  She is an author on multiple publications, and had an NIH Postdoctoral National Research Service Award (NRSA) from the National Heart, Lung and Blood Institute.  She is the first author on several presentations at conferences including Experimental Biology, Society for Behavioral Neuroendocrinology, and the Illinois Brain, Behavior and Immunity Conference.  She now works in the Human Research Protection Office at Columbia University (New York, NY).

Wil was a graduate student in the Grippo Lab from 2012-2016.  He assisted with studies of social stress and behavior.  He is an author on several conference presentations, including the first author on poster presentations at the Experimental Biology Conference and Animal Behavior Conference.  He received his MA degree in 2016.  He now works in the Office of Clinical Research at Indiana University (Indianapolis, IN).

Josh was a graduate student in the Grippo Lab from 2010-2016.  His research focused on stress and social behavior, especially the mechanisms underlying vicarious stress.  He is an author on several publications and presentations, including the first author on posters at the Chicago Chapter Society for Neuroscience Conference and the Experimental Biology Conference.  He received his PhD in 2016.  He is a Science Team Leader at St. Lucie West School (Port St. Lucie, FL), and also is a Freelance Scientific Editor for Cactus Global Communications and Accdon.